I have the preliminary designs completed and waiting for test models from Shapeways of the following:

I have so many projects but feel I'm making good progress but perhaps getting divided into too many.  I always like to make a test print to validate any models before releasing them, so it may be some time before they are for sale to the general public.  If you have interest in these please let me know. 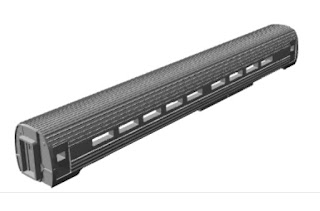 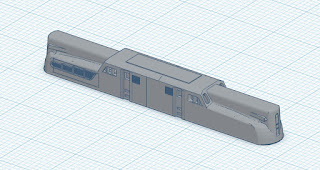 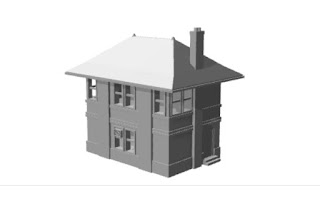 I had mentioned the fine Netzlof Design decals sold by CMR Products in a previous post and wanted to share another project utilizing their decals.

Some time ago I made a 3-bay hopper, which I recently revised to add more detail, and the results are attached.   The new hopper body is in the store.  Now, I still need the roller bearing trucks (still working on them..)  Oh and some COTS decals! 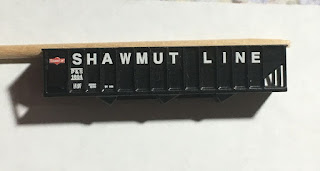 Seems like I have a million and one T-scale projects going on.. one of them is to come up with a better representation of North American track (mainly crosstie size and spacing) using the smallest (Code 40) magnetic rail available.

As a proof of concept, I made up some "flex track" ties and got a test print back; More improvements needed but, the difference is, to my eyes, fantastic!  I'm pretty fired up--stay tuned as I refine this model. 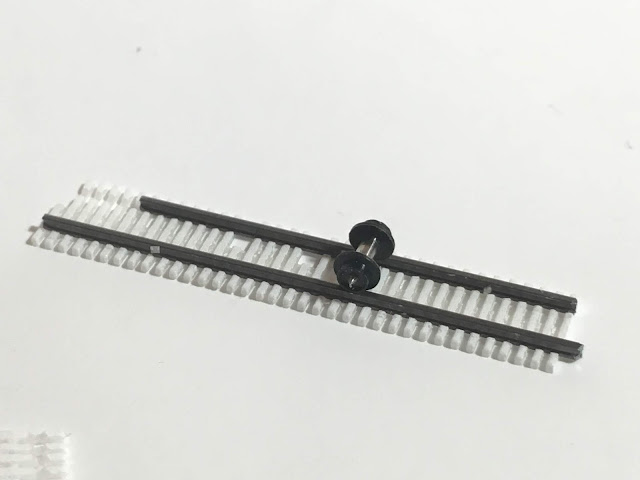 When I was a teenager, I accompanied my sister and mother on a trip east to look at colleges.  One stop was at Princeton.  I requested to be dropped off at the Princeton Jct. station on the Northeast Corridor and spent a great afternoon watching and photographing E60's, GG1's, Conrail and SEPTA trains.

Fast-forward 40 years and I am thinking about an idea for a T-scale layout/diorama of the Princeton Jct. station that would allow for a 4-track mainline under catenary, with Conrail diesels and Amtrak trains. 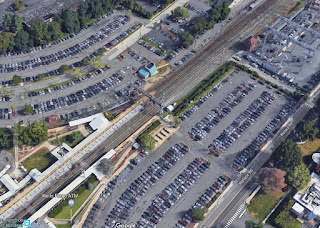 Which got me thinking of developing a few models in T-scale to use on such a layout.  I have 3 prototypes in the works that would fit nicely.  They all still need refinement but I am making progress. 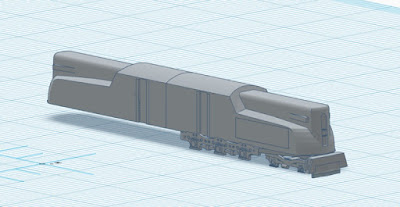 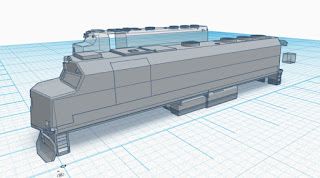 One of the other benefits is I am developing an internal bearing bogie which can also be used on the bi-level coaches.  Still, lots of work to do but I'm very productive lately.  The biggest snag is the cycle time to get prototypes from Shapeways.  Speaking of which, several models previously mentioned are on the way and/or being revised.
Posted by Jesse at 5:47 AM No comments:

A Couple of Developments

One of my sources of "prototype futzing" with T-scale has been the couplers.  The stock couplers, with their square/angular oversize appearance, just don't look much at all like real couplers--at least those found in North America (or some other parts of the world, Australia, South America, etc.).  They might have some redeeming quality if they actually were operational, but they aren't (although the good people at T-Gauge.Com are developing a T-scale coupler that has some automatic coupling capability!).  I don't forsee T scale being much of a switching scale for the time being, but I do want more prototypic rolling stock for the "roundy-round" style I want, so I set about trying to make a better coupler, more resembling the standard knuckle coupler found in the US.

First, I scaled down a typical prototype coupler in the US (the Janney Coupler) and printed in what materials I could on Shapeways.  At the time this was only the old "Frosted Detail";  but the results not only were these just too small, but far, far too fragile.  So I scaled them up and printed them in bronze.  This was semi-successful.  The fit was so tight I needed pliers to get them apart, and the cost was outrageous (somewhere around $15 for a set of 4).  There were no other alternative materials, and so the project was set aside.

Fast forward a few years, my interest in T-scale rekindled.. and some additional material options available on Shapeways.  I tried the "Professional Plastic" and it seemed to have promise.  After a couple tweaks to the design I printed what you see below.  They come on a small sprue and printed in a gray material, so I painted a rust-brown color. 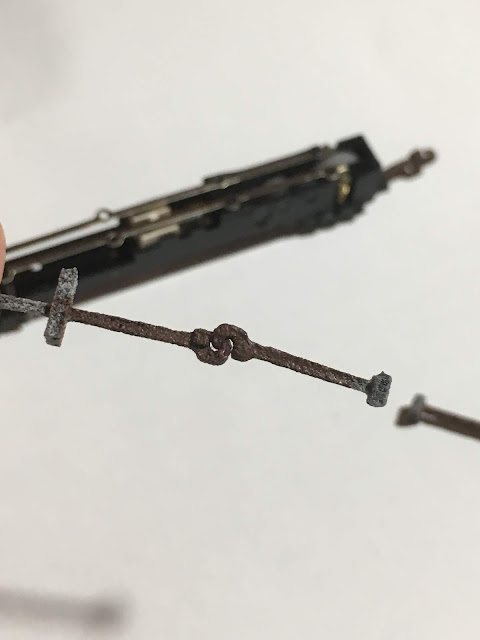 Note they are holding together unaided.  It is a decently firm grip--but not so tight you can't separate them.  The material is grainy in texture, but paint seems to fill in the texture, even looking a bit like cast iron.  They are somewhat flexible and are remarkably strong and resilient.  I found I had to sand/trim them a bit to fit through the pilot hole in the GP40, reducing the horizontal profile a bit. 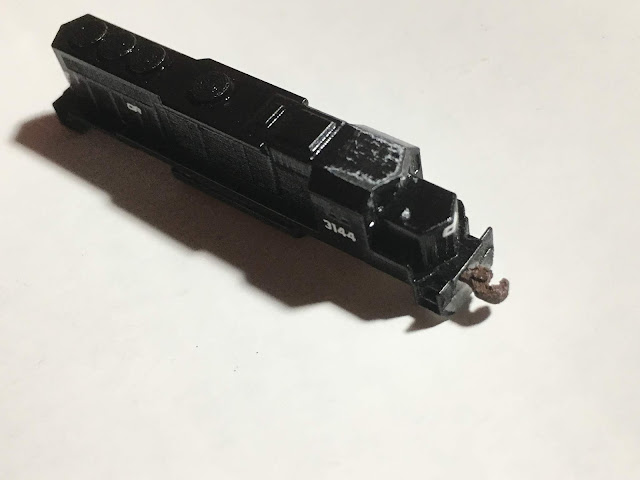 Yes they are still over-sized but they are small enough and prototypic-looking enough for me to be "good enough".  I will be striving to make them smaller and see how small I can get.
Posted by Jesse at 8:02 AM No comments:

Prototypes being made at Shapeways currently:
-- 89' intermodal flatcar.
-- 60' smooth-side hi cube boxcar.
-- Track bed (North American prototype).  This track bed will have North American tie spacing and is designed to accept the Code 40 rail available from T-Gauge.com.  My goal is to make more realistic looking track.  This will just be straight/curvable sections, but if the concept works it's possible turnouts and other trackwork may be added.
-- RDC-4 design added with "open" windows and under-body detail is in process and awaiting test model.


Test models received from Shapeways:
-- 50 foot outside post modern boxcar with improved details.
-- 3-day open hopper revised and test model received and looks good as well.  I will post pictures shortly of both this and the boxcar.
-- Knuckle-style couplers work better, but still need some adjustments to drawbar.
-- Blomberg and Roller Bearing Freight trucks, need adjustments for proper width.
Posted by Jesse at 9:28 AM No comments:

I have been extremely busy lately designing and evaluating new models, and revising old ones.  Here are some of the updates:

-- 50 foot outside post boxcar revised with better details.-- 60 foot smooth side boxcar added.
-- RDC-4 design added with "open" windows and under-body detail (will revise RDC-1 similarly if this works.  I want to try Krystal Kleer as the window material.)
-- Added both 53 foot and 45 foot trailers and did custom designs.
-- Knuckle-style couplers being modified to look and work better.
-- Blomberg B, Blomberg M, and Roller Bearing Freight trucks in the pipe designed to work with needle-bearing axle wheelsets.

Blue sky on the white board:
-- 89' flatcar
-- Track bed (North American prototype)
-- Opening up windows on passenger cars to allow for use of "Krystal Kleer" style or other windows.
-- Amfleet coach 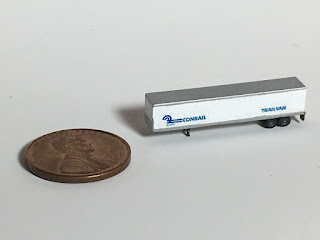